The Catasetum orchid genus has unisexual flowers, either male or female (they look different); which type appears is controlled by the lighting. If grown in low lighting like a Phalaenopsis, male flowers will appear; if grown in high lighting like a Cattleya they’ll have female flowers. The two flower types look different, so there will probably be one or the other that you’re looking for for the particular species you’re growing. (The male flowers are usually preferred, as they often have small, green, hooded female flowers.)

For this particular family of orchids, after blooming occurs the plant goes into a dormancy/resting period where the leaves WILL YELLOW and DROP. This is completely normal. This resting period allows the plant to conserving its energy for the next growing cycle. Watering should also be reducing during dormancy.
Which type of flower a plant produces is determined by the conditions under which it grows. Male and female flowers are markedly different in size and color. At first, taxonomists even thought they were dealing with different species, a puzzle which Charles Darwin resolved when writing Fertilisation of Orchids. There are rare cases in which a single plant in intermediate conditions will produce both male and female flowers.
Many of these species are known to germinate in ant nests high in the canopy and host ant colonies, which provide the plants with an abundant supply of nitrogen, and they also host ants in cultivation frequently. Most of these species are considered moderately difficult to maintain in cultivation without a greenhouse or wardian case and some of them defy cultivation. Most of them cannot tolerate dryness and some of them have very specific temperature requirements. Some of these species are ant plants and attract ant colonies and can become a nuisance in cultivation.

What triggers or initiates spike growth on phalaenopsis is cool night temperatures of around 25 degree C for several weeks.A temperature of 32 degrees, even for a short time, will prevent spiking.
so my phalaenopsis plant grows quite well, but doesn’t bloom reason could be too high temperature. We find that phalaenopsis flower quite well at 16.5 degree C. If you are growing the plants indoors, artificial lights nearby might cause long days and thus inhibit flowering. If the plants seem to be growing well, water and fertilizer applied as directed, temperature ideal, and still no flowers, then not enough light is probably the answer. Gradually increase the light intensity . If growing in the home, move the plants to a nice, bright windowsill.

so What triggers or initiates spike growth on phals is cool night temperatures for several weeks. But, prior to this, it should have been growing and building up nutrient reserves within its leafs. This brings up a concern about how healthy the plant is, whether the leafs are full and firm (healthy) or somewhat limp and droopy (unhealthy).
other facts/methods

1)Some Phal species do not require temperature drop to initiate spike.

2)Timing these is very important for the cut flower industry. The nurseries that fill those markets grow their Phals in extremely dense shade–just a little more light than you’d get on a clear night with a full moon–for several months under tarps. When the tarps are removed and normal light levels restored, the plants spike within two weeks.
The darkness delays the normal spike season for the particular type of plant. In other words, if you have a Phal that normally spikes in December, and you want it to spike in March, you could drastically reduce light levels in mid November, then restore them in March to make the plant spike.

3) study points to the possibility of using intermittent high temperatures to prevent spiking. By applying cycles of 1 to 3 weeks of reduced temperatures (down to 59°F or 15°C) followed by 1 week of high temperature to inhibit spiking between late fall and early spring, it may lower the cost of inhibiting spiking by using constant 82°F (28°C).

vertical garden or green wall is a wall, either free-standing or part of a building, that is partially or completely covered with vegetation and, in some cases, soil or an inorganic growing medium. 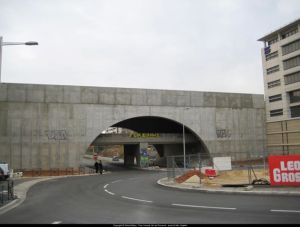 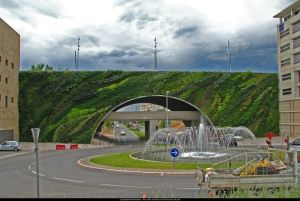 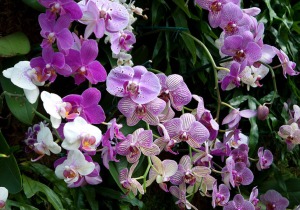 may help the following links 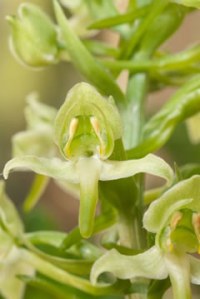 A south European orchid with dark green flowers that are larger and less fragrant than Platanthera bifolia;
sometimes placed in genus Habenaria .This orchid is also known as greater butterfly orchid. 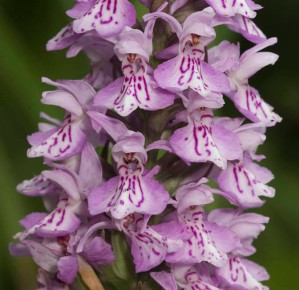 Dactylorhiza fuchsii a splendid cultivated form of this easy plant. Attractive greyish leaves are lightly covered in diffuse purple spots.
This is held below long, packed spikes of shell-pink flowers, each of which is intricately spotted and dotted with
candy pink.An easy plant, in the garden, in a moist sunny soil. The best Dactylorhiza to start with,
and one which will, in time, make a splendid garden display.

Ophrys lutea is found in Portugal, Spain, France, Italy, Greece and the surrounding Mediterranean islands and plus
western area North Africa in cool grassy areas of 0 to 1800m in elevation.It is found in areas with partial sun.
Plant blooms from winter to spring with two to ten 2.5 cm flowers.
Plant should be grown from seeds. Avoid fertilizers, transplanting, and fungicide because it may kill
the symbiotic fungus. Plant in low nutrient soil with partial sun. 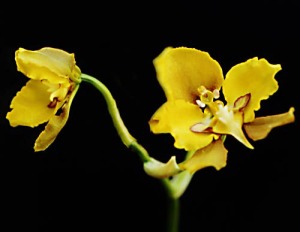 Ascocentrum has about six species in Asia and the Philippines that are compact vanda like plants and
have upright inflorescences with dense cones of smaller flowers.
Most of these plants are warm to intermediate growers that like slat basket culture with little or no potting media.
The offspring have the small plant size of the ascocentrum combined with the larger flower size of the vanda. 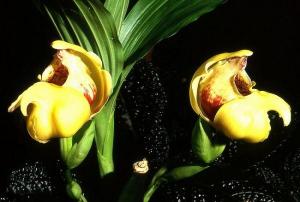 Anguloas, also called Tulip Orchids, are relatives of the Lycaste orchid genus.
They are found in South American rainforests. The flowers have good substance, and they are fragrant orchids,
typically smelling of cinnamon. Colors are geen, white, yellow, and red.
The flowers are round and curved inward, giving them a resemblance to tulips.
They have large, thick pseudobulbs, with long, thin, veined leaves.

Terrestrial orchids share some characteristics with their greenhouse counterparts. These plants come in many shapes and size, produce blossoms in a rainbow of colors, and are famous for filling the night air with wonderful aromas. Unlike their tropical cousins, however, these woodland flowers do not produce aerial roots or stems that climb trees and bushes. They prefer to keep their roots firmly planted in the earth.